Pulse Width Modulation or PWM is a term you hear a lot if you are interested in controlling power output using a microcontroller. It has many applications, although one of the most popular amongst hobbyists is controlling the brightness of LEDs.

In this tutorial we will cover the basic principles behind PWM and how it can be used for LED brightness control including fading out LEDs rather than just turning them on and off. 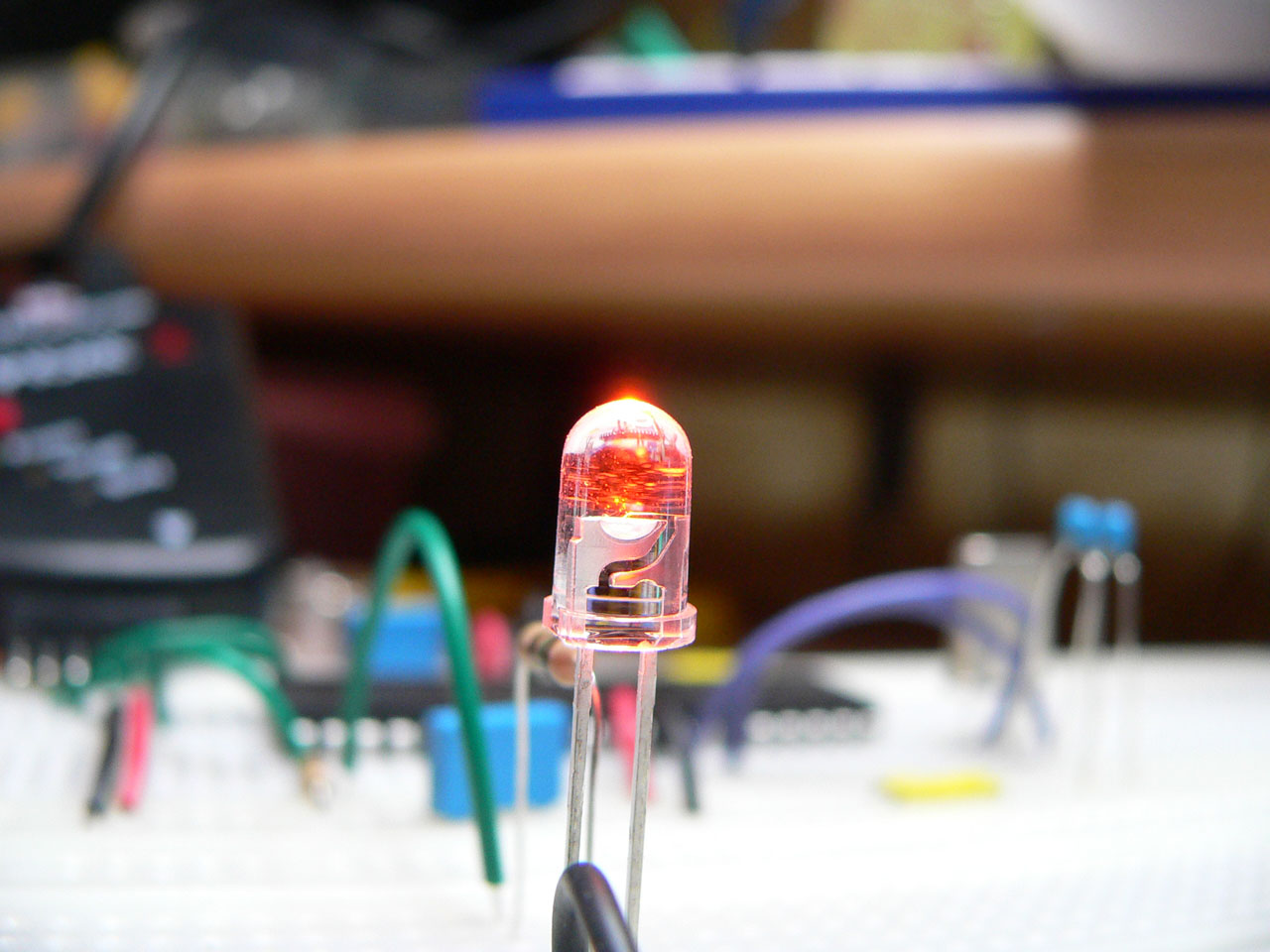 This tutorial is primarily designed as a video tutorial. You can watch the full video on YouTube, please use 780p or 1080p for clearer diagrams:

To control the brightness of an LED you can vary the power which is sent to the LED, for example using a potentiometer (variable resistor), the more power the LED receives the brighter it is, the less power it receives the dimmer it is. Microcontrollers are digital, meaning they only have two ‘power’ states, on and off. Although it is possible to supply a varying power from a microcontroller (using a Digital to Analogue Converter (DAC)) this usually requires an additional chip.

PWM provides the ability to ‘simulate’ varying levels of power by oscillating the output from the microcontroller.

If, over a short duration of time, we turn the LED on for 50% and off for 50%, the LED will appear half as bright since the total light output over the time duration is only half as much as 100% on. The important factor here is the ‘duration’, if we turn the light on and off too slowly the viewer will see the flashing of the LED not a constant light output which appears dimmer. The pulsing width (in this case 50%) is the important factor here. By varying (or ‘modulating’) the pulsing width we can effectively control the light output from the LED, hence the term PWM or Pulse Width Modulation. 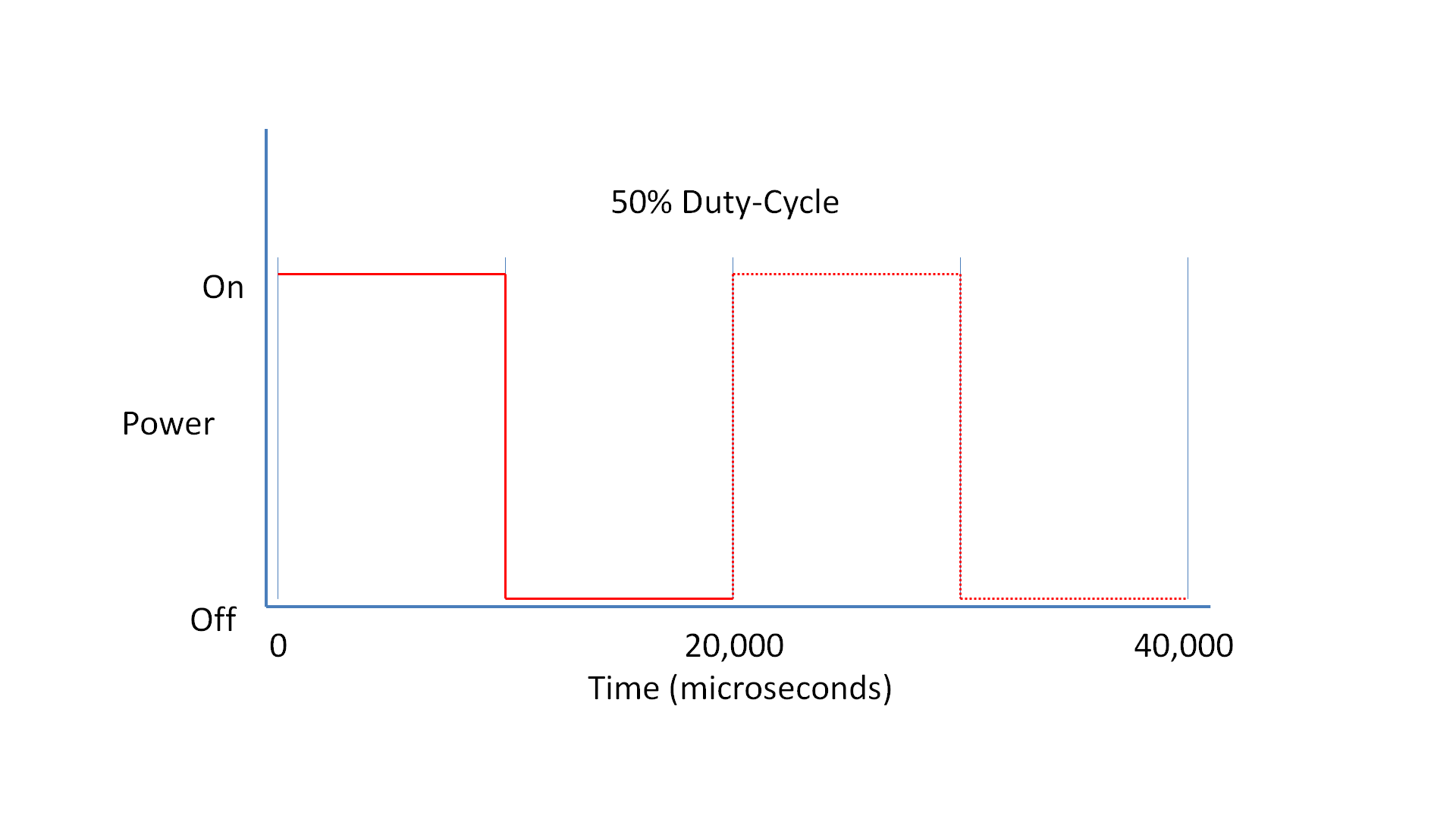 When using PWM it’s important to consider how slowly we can ‘flash’ the LED so that the viewer does not perceive the oscillation. The eye’s inability to see rapid oscillations of light is caused by our ‘persistence of vision’ which means, in very simple terms, we see the light as on even after it has turned off. This technique is how televisions display a seemingly moving picture which is actually made up of a number of different still frames displayed one after the other very rapidly.
The minimum speed of an LED oscillating which can be seen by the human eye varies from person to person. However, for the purposes of this article, we will use a minimum speed of 50Hz, or 50 times per second (the same speed as used by European televisions).

When using PWM there are certain terms which you will come across again and again. The most important term is ‘duty-cycle’. The duty-cycle refers to the total amount of time a pulse is ‘on’ over the duration of the cycle, so at 50% brightness the duty-cycle of the LED is 50%. The ‘cycle’ itself is measured (usually) in Hertz which gives us the cycles-per-second. So at 50Hz our cycle is 1 second divided by 50 cycles, which is 0.02 seconds. Since we are using such small time measurements it’s more useful to use microseconds (there are 1,000,000 microseconds in a second), this gives us a cycle duration of 20,000 microseconds which is 50 cycles per second or 50Hz. 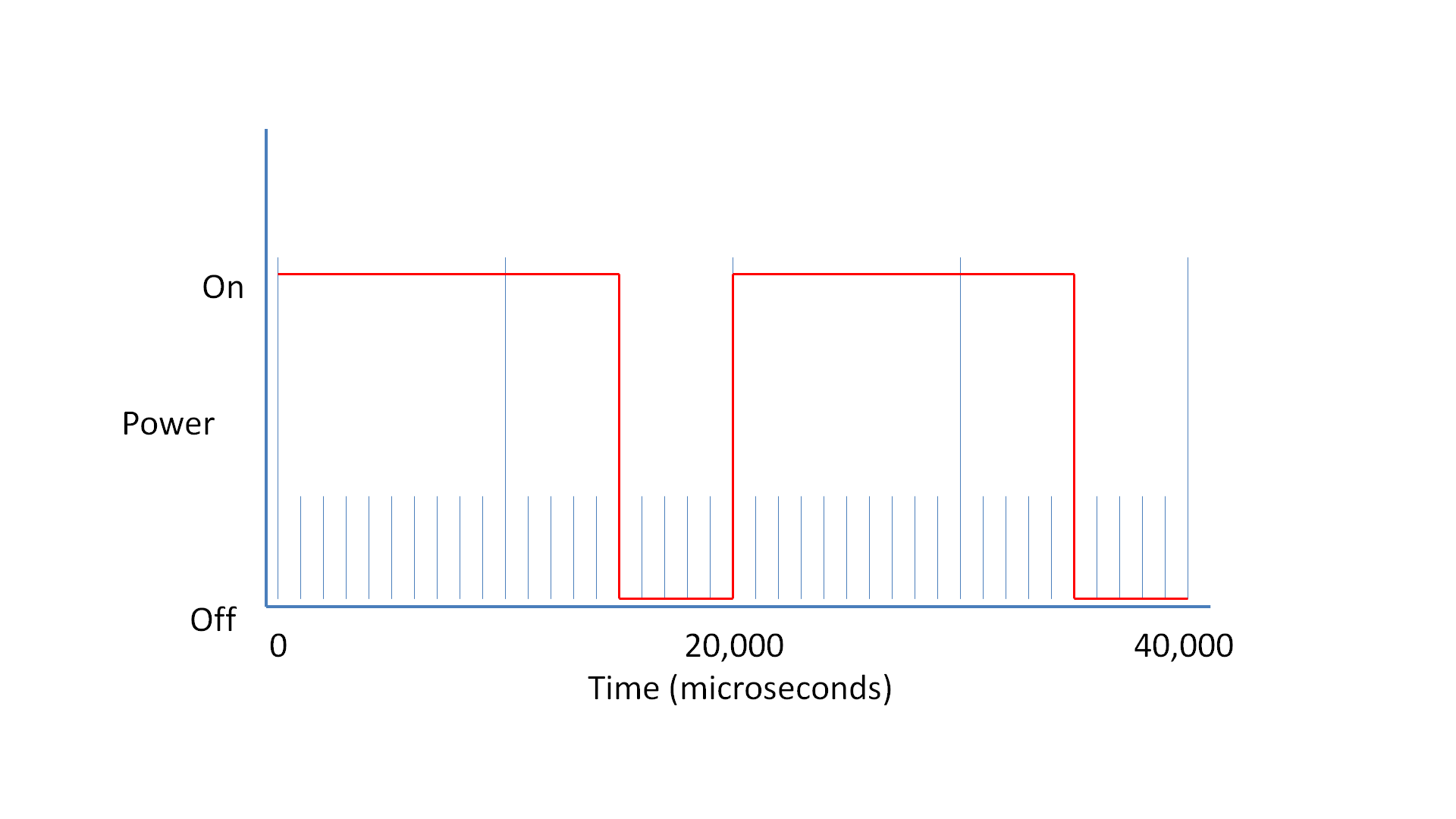 The accuracy with which we can control the duty-cycle is known as the ‘PWM resolution’. The higher our PWM resolution is, the more levels of ‘brightness’ we can display. However, since the duty-cycle is ‘fixed’ at 50Hz more resolution requires finer timing from the microcontroller. The faster the microcontroller, the smaller durations it can time. Another limiting factor is the code execution, the microcontroller must not only time the ‘interrupt’ which causes the pulse generation, but also run the code which controls the LED output, which must complete before the next interrupt is called. In addition, you probably want your microcontroller to be performing tasks other than LED PWM brightness control, so there has to be some spare execution time between interrupts to do all of the other more general processing tasks. 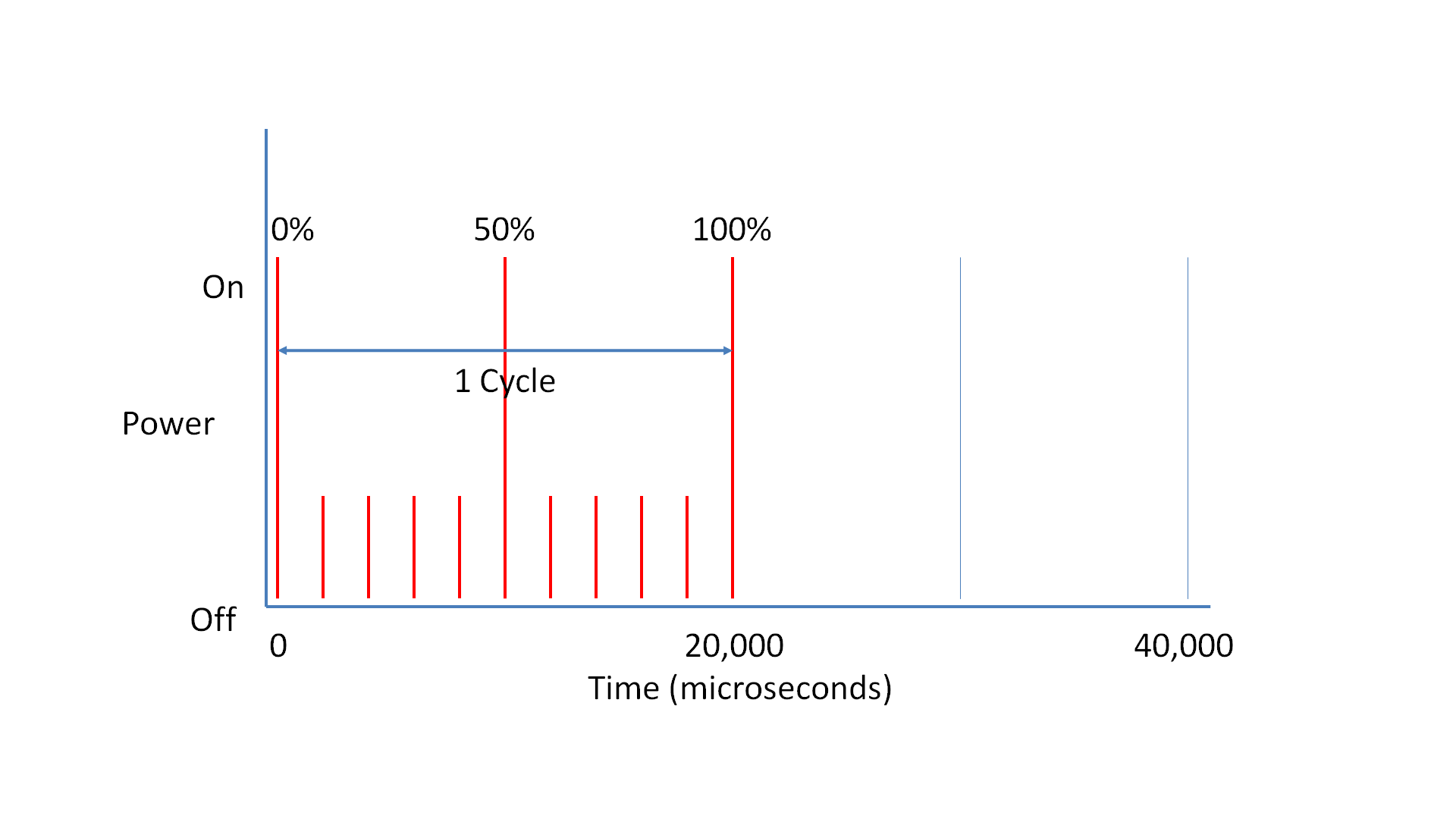 For your application the required resolution and overall duty-cycle may vary. Simple displays require very little precision control (and sometimes a little flickering is not the end of the world), for more advanced displays the ability to control levels of brightness might be critical (think of the issue of mixing colours using a RGB LED for example). The trade-off is simple, more control and accuracy requires more and more microcontroller resources.

In this article we will focus on an example which supplies a resolution of 1,000 microseconds over a 20,000 microsecond duty-cycle (or 50Hz with steps of 5% giving us 20 levels of brightness). This level of control and accuracy is suitable for many purposes.

To perform the PWM using an interrupt we have to call the interrupt once every 1,000 microseconds and decide if the LED should be on or off. To do this we have to set up a timer on the microcontroller which calls the interrupt when it expires.

For this example we will take a Microchip PIC18F4550 microcontroller running at 48Mhz as the example. 48Mhz means the clock of the microcontroller will ‘tick’ 48,000,000 times a second. This is referred to as ‘Fosc’ (the Frequency of oscillation). A PIC18F4550 requires 4 ticks of the clock to process a single instruction. This means the smallest amount of time we can deal with using the microcontroller is a quarter of the clock rate, i.e. 48,000,000 / 4 = 12,000,000 (this is also known as Fosc/4), if there are 1,000,000 microseconds in a second, this means we execute a command around once every 0.0834 microseconds (12 MIPS (Million Instructions Per Second)). Although this is not quite correct in PWM terms since to generate a pulse we would need two commands (on and off) meaning a minimum cycle time of 0.167 microseconds (this effectively limits the highest frequency we can produce in software to 6Mhz, although this is not a very practical maximum).

Since we cannot count a ‘half’ we simply round the figure down to the nearest integer (this means are resulting PWM will not be totally accurate, but for the purpose of controlling LED brightness this is not very critical). The higher prescale value we use, the less accurate the timing becomes. This can be corrected by using a 16-bit timer which allows us to count far more ticks and therefore use a lower prescale value.

For a PIC18F4550 this will result in code similar to the following excerpt where the timer0 module is configured, enabled and set to generate a low-priority interrupt:

Once the timer is configured and running we need some interrupt code to decide if the LED should be on or off for the interrupt. Since we have 20 possible brightness levels (and therefore 20 steps of resolution in our PWM generation) we can simply use a counter which counts from 0-19 and is updated once every interrupt. If the brightness of the LED is represented using a number from 0-19 we simply have to check if the PWM counter is higher or lower than the brightness number to see if the LED should be on or off.

However, for fading off we want to decrement the actual brightness level one step at a time until it equals the target brightness. Since there are only 20 levels of brightness we cannot simply subtract a level on each interrupt call since the interrupt call is too fast for the fade to be perceived by the viewer (20 calls would only consume 20,000 microseconds which is too fast to see).

Instead we keep another counter which counts a number of interrupt calls which should occur in between decrementing the actual fade level. Since we know the interrupt is called every 1,000 microseconds it’s pretty straight-forward to work out how many interrupts we should count to get a desired fading rate. For example, if we want a fade from brightness level 19 to 0 to take 0.5 seconds we simply divide the required time (in microseconds) by the interrupt time of 1,000 microseconds and then by the number of levels. Therefore 0.5 seconds (or 500,000 microseconds) = 500,000 / 1,000 = 500 /20 = 25. This is shown in the following code excerpt:

Whilst it is perfectly possible to get PWM controls to work with LEDs using pure guess work, calculating the desired optimum values makes more efficient use of the available processor resources allowing you to both do more with the microcontroller and/or control more LEDs simultaneously from the same chip. The same techniques shown here for LEDs can also be used to control motors, analogue meter displays, incandescent light bulbs, etc.

Source-code for both demonstrations: